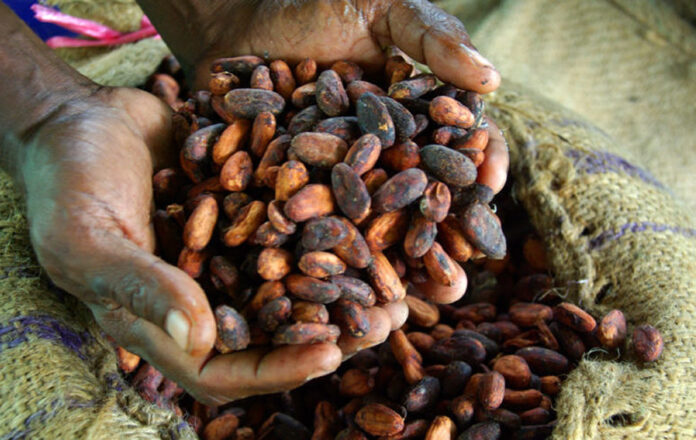 Food commodities — from wheat to rice to soybeans — have become objects of speculation. While cocoa speculators are threatening the survival of some of Germany’s oldest chocolate makers, entrepreneurs in Ghana are trying to give farmers a larger share of the profits.

Hasso Nauck lives in a world of things that look and smell beautiful. He collects antique cars and plays golf, and his workplace is filled with the scents of chocolate. As he sees it, it’s the best chocolate in the world — because he makes it. Pralines, cocoa truffles and chocolate-covered “ginger tips” are only three of the 110 items in the product line of Hachez. The traditional chocolate maker calls its product “chocolade,” a mix of the French and the German words for chocolate.

Nauck has been at the helm of Hachez, based in the northern city-state of Bremen, for the last 20 years. Although the chocolate business has always been relatively straightforward, this last year has seen some strange things happening.

For example, Nauck recently had to sit back and watch as a civil war erupted in Ivory Coast because two men couldn’t agree on who was president. A man named Alassane Ouattara, the country’s newly elected president, issued a ban on exports and took the country’s cocoa off the world market, though it meets roughly 35 percent of global demand.

When Nauck got into the chocolate business more than 30 years ago, the market was still a trader’s market; it was straightforward and easy to understand, and cocoa prices followed the rhythm of the harvests. But now Nauck could see how unrest in a faraway country was causing raw cocoa prices to skyrocket. At least for now, that was the peak of the turbulence. But it all began much earlier.

An Attack out of Nowhere

On the morning of July 15, 2010, Nauck realized he was being attacked.

It was 8:30 a.m. on a cloudless, beautiful day. Nauck was sitting at his desk made of polished Oregon pine on the fifth floor of an old factory building with a view of the church spires in Bremen’s market square. Nauck was going through his mail. The quarterly figures were looking good, the company had just hired 62 temporary employees and the economy was picking up steam. As he was going through his morning routine of checking prices and stocks online and glancing at a few websites, Nauck saw something that startled him.

The price of cocoa was dramatically high. In just two days, it had risen by 132 British pounds (€148, or $220), and it was still rising. During the course of that trading day, the cocoa price in London would climb to £2,732 per metric ton, a 33-year high. It made Nauck fear for his livelihood, his workers and his factory — in short, for everything he was about.

Nauck is the majority shareholder and managing director of Hachez, one of Germany’s 90 chocolate makers. The company was founded in Bremen in 1890 by Joseph Emile Hachez, and Nauck’s grandfather was already a co-owner in the 1920s. In 1990, when the company was in trouble, Nauck took out millions in loans and bought shares in Hachez. As the company’s new managing director, he updated its product line to suit modern tastes.

Anthony Ward, the man behind the attack on Nauck, is sitting in an office in London. The fund manager and trader has been given the nickname “Choc Finger,” a play on the James Bond villain Goldfinger. In the industry, though, it is meant as a term of admiration.

Anyone who understands the basic rules of Ward’s game, commodity speculation, can also understand why the global economy is plunging from one crisis to the next.

Ward doesn’t like journalists, and he hardly ever grants interviews. Instead, he employs two public relations agencies, whose publicists can say a lot without saying anything.

A broad-shouldered man in his early 50s, Ward grew up in an upper-class family with a long line of merchants. His grandfather reportedly supplied the British Navy with rum. His office is in a black-painted townhouse in Mayfair, London’s most exclusive neighborhood.

“When it comes to money,” says a man who worked with Ward for years, “he focuses on this goal alone.”

Ward had long spoken of his ambition to corner the world cocoa market, and he had already attempted to do it twice before, in 1996 and 2002. He embarked on his third attempt on July 15, 2010.

The price of raw cocoa reacts to news from producing countries and the sizes and quality of harvests, but it also reacts to rumors. That is why there are always speculators on the cocoa exchange in addition to traders and chocolate makers, people like Ward in addition to people like Nauck. The former make bets on whether the price of cocoa will go up or down, gambling on whether there will be a surplus or a shortage of the commodity.

In trading terms, someone who believes that prices for a commodity like cocoa will rise is said to be “going long.” He orders the commodity for delivery at a later date, but at today’s price. In doing so, he hopes to secure an advantage by being able to resell it at a higher price when — as he expects — it gets more expensive. Someone who goes long anticipates scarcity.

On the other hand, someone who expects prices to fall is said to be “going short.” He sells a commodity for delivery at some point in the future, but at today’s price. In doing so, he hopes to be able to buy the commodity for resale at a lower price in the future. If he’s right, his advantage is that he is locking in the current, high price before the commodity’s price goes down. Someone who goes short anticipates a surplus.

Looking back, it would appear that Ward knew exactly how to bet on the price of cocoa because he knew for sure that it would become scarcer. And he knew this because — conveniently enough — he was actually the very person to make it scarcer in the first place. Indeed, Ward behaved like someone who sees a long line in front of the bakery on a Sunday morning and buys 400 rolls, only to resell them to the people waiting outside at double the price.