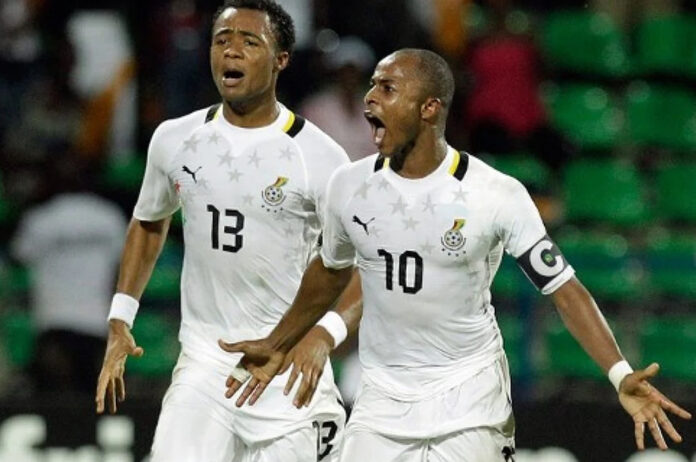 Brothers Jordan and Andre Ayew scored for Ghana as they reached the Africa Cup of Nations semi-finals Sunday with a 2-1 win over the Democratic Republic of Congo in Oyem.

Jordan opened the scoring after 63 minutes of a tight, bruising quarter-final in northern Gabon and Andre put Ghana ahead again from a 78th-minute penalty.

They are sons of Ghana football legend Abedi ‘Pele’ Ayew, ranked among the greatest African footballers of all time.

Between the Ayew goals, Paul-Jose Mpoku levelled for DR Congo on 68 minutes.
Ghana, seeking a first Cup of Nations title since 1982, will play Cameroon next Thursday in Franceville for a final place.

It will be a sixth consecutive semi-finals appearance for four-time champions Ghana, who were runners-up in 2010 to Egypt and in 2015 to the Ivory Coast.

They overcame DR Congo without captain and striker Asamoah Gyan, who failed to recover from a thigh injury sustained in a group loss to Egypt four days ago.

“We corrected some mistakes at half-time and were a totally different team in the second half,” Ghana coach Avram Grant told SuperSport.

“Both our goals were fantastic, as was the one scored by Congo, who were a well organised team.”