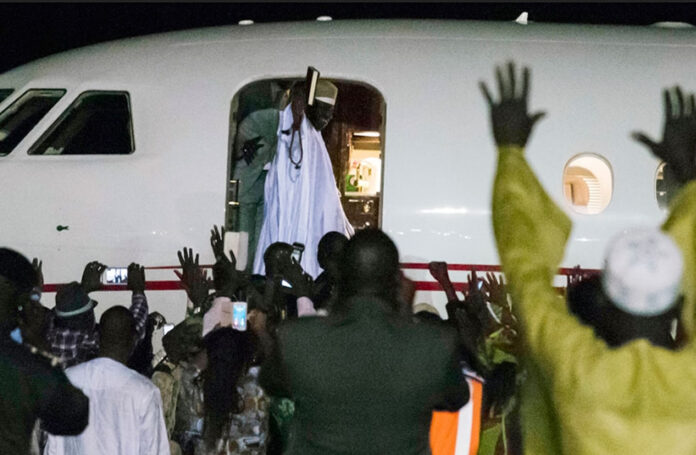 Exiled former leader accused of ‘stealing’ state funds as regional troops prepare to secure arrival of President Barrow. The Gambia’s ex-ruler, Yahya Jammeh, plundered the state coffers in his final weeks in power, stealing millions of dollars and shipping out luxury vehicles by cargo plane, according to an aide to new president Adama Barrow.

Jammeh, who ruled the small West African country for 22 years, flew into exile late on Saturday to Equatorial Guinea.

He had refused to concede defeat in a December 1 election but eventually relinquished power after a delegation of West African leaders convinced him to step down, even as troops from neighbouring countries entered The Gambia.

On Sunday, hundreds of Banjul residents cheered a military force by ECOWAS, the West African regional bloc, as it entered the capital to provide security and allow Barrow, who has been in neighbouring Senegal for more than a week, to return and take power.

But amid growing controversy over the assurances offered to Jammeh to guarantee his departure, Barrow adviser Mai Fatty said the new administration had discovered that millions of dollars had recently been stolen.

“The coffers are largely empty,” he told reporters in the Senegalese capital, Dakar.

“Over two weeks, over 500m dalasi ($11 million) were withdrawn” by Jammeh, he said. “As we take over, the government of The Gambia is in financial distress.”

Fatty also said that a Chadian cargo plane had transported luxury goods out of the country on Jammeh’s behalf, in his final hours in power, including an unknown number of vehicles.

Barrow’s aide said officials at the Banjul airport have been ordered not to allow any of Jammeh’s belongings to leave.

Fatty also said the president is eager to return to The Gambia “as soon as possible”, warning, however, that “the state of security in The Gambia is still fragile.”

The regional military operation was first launched late on Thursday after Barrow was sworn in as president at Gambia’s embassy in Senegal, but it was halted hours later to give Jammeh one last chance to leave peacefully.

His departure followed two days of negotiations led by Guinea President Alpha Conde and Mohamed Ould Abdel Aziz of Mauritania, prompting speculation over what, if any, terms were agreed upon to convince him to step down.

“He wanted to stay in Gambia,” Barrow told radio station RFM in Senegal. “We said we couldn’t guarantee his security and said that he should leave.”

Barrow, who says he plans to establish a commission to investigate alleged human rights abuses by Jammeh’s regime, denied that the former ruler had been offered immunity from prosecution in exchange for leaving the country.

Critics have raised concerns over the wording of a statement issued by the United Nations, ECOWAS and the African Union that seemed to offer Jammeh comfortable guarantees for his future.

“No legislative measures” would be taken that would infringe the “dignity, security, safety and rights” of Jammeh or his family, it said, noting that property “lawfully” belonging to him would not be seized.

Equatorial Guinea is not a signatory to the Rome Statute that established the International Criminal Court, meaning Jammeh would not be extradited in the event he was charged with crimes against humanity or other serious offences.

The declaration also said Jammeh’s exile was “temporary” and that he reserved the right to return to the Gambia at the time of his choosing.

“The agreement essentially says there can be no prosecution against Jammeh, his family or his entourage; there will be no seizure of his assets, no witch-hunts, and he can be back to the country at any time, ” Al Jazeera’s Nicolas Haque, reporting from Dakar, said.

“It might sound like a good deal for Jammeh, but we have to bear in mind that this is a political document, not a legally binding one, so it still brings hopes for those wanting to prosecute Jammeh or those in the security services over alleged human rights violations.”

In Banjul, hundreds of residents assembled outside the State House on Sunday, as ECOWAS soldiers moved in to secure the compound.

Cheering and singing, some sought to capture the moment for posterity, posing for photos with the Senegalese troops.

“We are free,” food seller Isatou Toure, 35, told Reuters news agency. “Everyone is so happy that man is gone. We are happy to see (the soldiers). They protected us from Jammeh.”

Senegalese army officials said the force, which also includes troops from Nigeria, Ghana and Mali, met no resistance as they advanced on Sunday.

Defence chief Ousmane Badjie said the military welcomed the arrival of the regional force “wholeheartedly.” With proper orders, he said, he would open the doors to the notorious prisons where rights groups say many who have disappeared over the years may be kept.

“We are going to show Barrow, we are really armed forces with a difference, I swear to God,” Badjie said.

Some of the 45,000 people who had fled the tiny country during the crisis began to return. The nation of 1.9 million has been a major source of migrants heading towards Europe because of the situation at home.