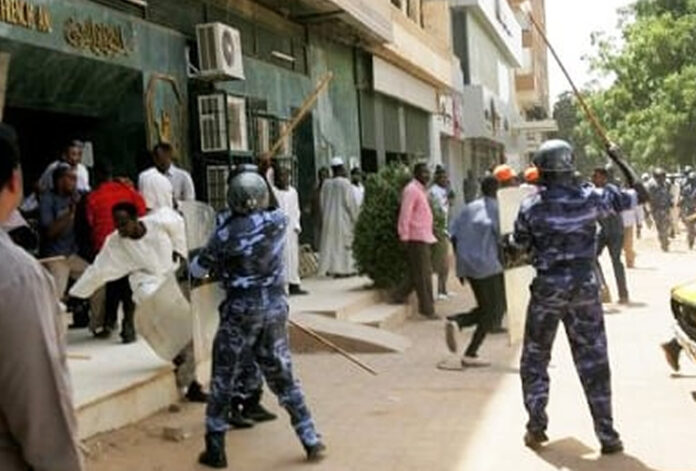 NAIROBI, 25 February (IRIN) – Anti-government protesters, who have taken to the streets of Khartoum and other Sudanese cities over recent weeks, run the risk of sexual assault, torture and detention, say human rights workers and demonstrators.

“We confirmed five cases of women who were sexually assaulted during or after the protests,” said Rania Rajji, Amnesty International’s Sudan researcher, adding that there had also been cases of torture, and injured people being denied medical care while in detention. According to Amnesty, some 60 people who took part in protests are in the custody of security forces.

However, government spokesman Rabie Abdul Attie told IRIN the number was between four and 10.

“They are detained because they violated the law, you need to get a licence to demonstrate in Khartoum. That is to protect people and allow them full freedom of speech,” he said.

The alleged sexual abuse against female demonstrators has also been condemned by the Sudan Democracy First Group, a coalition of activists, trades unionists and academics.

The group released a statement [ http://www.ahewar.org/eng/show.art.asp?aid=1252 ] on 20 January detailing the experiences of six women detained by security services in February, including the daughter of prominent government critic Hassan al-Turabi, who is also now in detention.

One of the women, according to the statement, had been “beaten on all parts of her body during her interrogation”. Others were forcibly undressed and several were verbally abused “with revolting sexual language” during their detention.

In Khartoum, about 150 people were arrested and one student killed during clashes between demonstrations and police, said Amnesty.

According to media reports, protests have taken place not only in Khartoum but also in its twin city, Omdurman and El Obeid.

At least one newspaper has been shut down, said the Committee to Protect Journalists, while students told IRIN a university had also been closed.

The Sudanese protesters share some of the same awareness-raising tools as their counterparts elsewhere in the Middle East: Twitter and Facebook pages, such as “Youth For Change” [ http://on.fb.me/i6Mp5b ], where one poster wrote: “Sudanese people are not going to be silenced. It is time to demand our rights.”

“With the international media focused on Egypt in the past few weeks, the detentions of protesters in Sudan have been greatly under-represented,” Dahlia, a university student who took part in some of the protests, told IRIN by email.

One of her friends, Habab, said two of her brothers were still detained since their 30 January arrest and were experiencing very harsh treatment. Sami, another student working for an NGO in Khartoum, said his fiancée had been detained and tortured by security forces. She was arrested during demonstrations in Gezira University.

“I decided a while ago that I won’t wait for someone to bring the change I want,” another student told IRIN, asking not to be identified. “I want to live in my country with dignity and I realized that people are actually waiting for a miracle. Most people are not willing to put themselves in danger. So when I heard about the mobilizations online, I decided that I will go on demos; that’s the first time I joined something like this.

“There is a consensus among the different groups mobilizing people that it is time for change and that they are going to support this with all means. It is important to note that we are all working to spread the word on the corruption, the killings and the torture. Everything [President Omar el] Bashir and his government did in the past 21 years,” she emphasized, adding that people in Sudan were joining efforts for another round of streets protests.

The unrest in Sudan comes amid rising prices of food and other basic necessities, as well as cuts to fuel and sugar subsidies and the near-unanimous decision by South Sudan, in a 9 January referendum, to secede from the North.

“There is clearly discontent in Northern Sudan with the prospect of Southern secession and with recently enacted economic austerity measures. But the protests in Khartoum were relatively small and appear not to have developed much momentum, in part because the security services in Sudan appear to be relatively loyal to the regime,” said Joe Temin from the United States Institute of Peace (USIP), a think-tank based in Washington.

Government spokesman Attie, however, said the Sudanese protests bore no comparison with those in Egypt. “In Egypt, there was a gap between the rulers and the people, but not in our country [where the rulers] live with the people,” he told the New York Times.

In an apparent move to appease protesters, El-Bashir, in power for more than 20 years, announced on 21 February that he would not stand in elections in four years’ time. He also said Sudan’s future would soon be discussed with the opposition in a national dialogue.