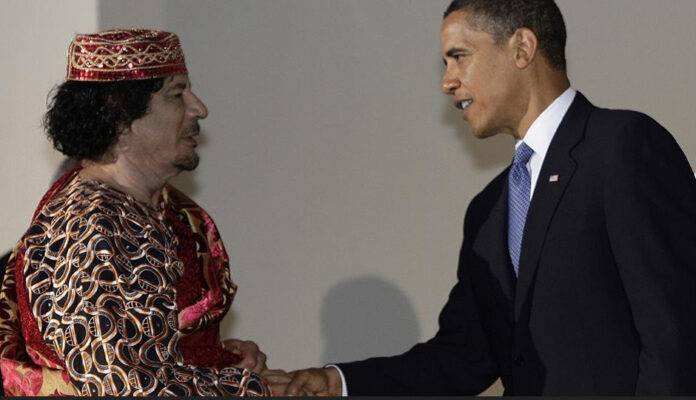 During his phone call to the German Chancellor Angela Merkel Saturday, the U.S. President Barack Obama said that Libyan leader Muammar Gaddafi should leave now as he has “lost the legitimacy to rule”.

“When a leader’s only means of staying in power is to use mass violence against his own people, he has lost the legitimacy to rule and needs to do what is right for his country by leaving now,” said Obama to Merkel.

On Friday, Obama’s administration has unilaterally imposed sanctions on Libya and temporarily closed its embassy there. Although the U.S. has criticized Gaddafi’s regime actions against Libyan protesters before, the Friday’s moves were the strongest steps it has taken so far.

Reportedly, Obama has also issued an executive order to impose travel bans on Gaddafi and his family and to freeze their assets. Apparently, in relation to the presidential order, the U.S. Treasury Department ordered American banks to scrutinize accounts linked to senior Libyan officials and to inform authorities of any attempts to misappropriate or divert public funds.

The American measures come as the U.N. Security Council and Human RightCouncil also works to take action against Libya. But so far, U.S. military action is seemed unlikely, although the administration has not ruled out participation in an internationally-administered protective no-fly zone.