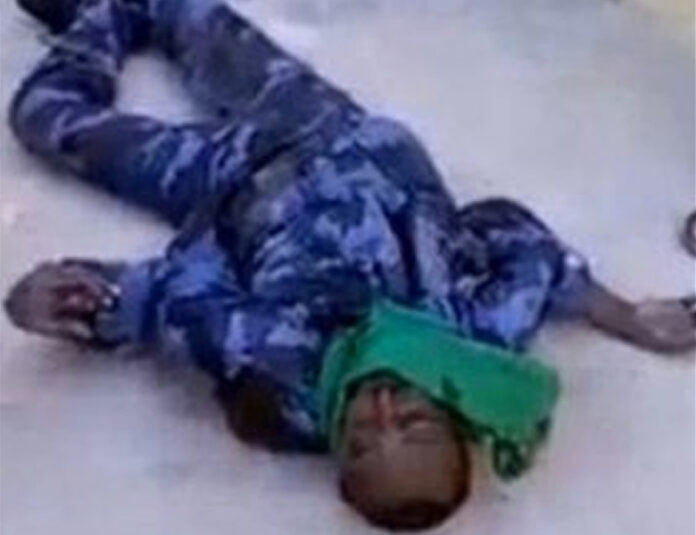 As defected army units and civilians in “liberated” eastern Libya are eager to demonstrate unity, “African mercenaries” are increasingly singled out as the enemy. Africans are systematically hunted down.

“Mercenaries” is the most used word among anti-Ghaddafi Libyans these days. It is increasingly used to describe everybody loyal to the Ghaddafi regime, while it for most people refers to “Black Africans” allegedly in the regime’s service.

As one city after the other gets “liberated”, mostly following the defection of Libyan army and police units, civilians and Libyan troops agree to stop mentioning the recent fights between Libyan nationals. The “mercenaries” were and are the enemy.

Sidsel Wold, an experienced journalist from Norway’s ‘NRK’ broadcaster currently in Al-Bayda, experienced the rhetoric first-handedly. She was told that the large battle about this east Libyan city had been fought around an army barrack, which everybody referred to as being defended by “mercenaries”.

Let to film the captured “mercenaries”, most turned out to have an Arab appearance. The few persons of sub-Saharan African appearance were all in civilian clothes. It became clear that several of these African “mercenaries” had been captured after the fighting.

Ms Wold also witnessed and filmed the interrogation of a captured Chadian citizen by a defected army officer. The Chadian, with civilian clothes, insisted he was a normal “civilian; a worker.” Asked why he and four other Africans had been observed fleeing, he said he had been “scared by the shooting.”

The defected Libyan army officer clearly stated he did “not believe” him. The attempt by a group of five sub-Saharan Africans to escape the city was “suspicious” in itself. The group was kept in detention – however in seemingly humane conditions – suspected of being “mercenaries”.

In Al-Bayda, the hunt-down and arbitrary arrest of sub-Saharan Africans goes on. Ms Wold also spoke to a group of Libyan youths, monitoring the streets in accordance with the city’s interim authorities – made up of civilians and defected army officers. The youths openly told her they were out, trying “to catch mercenaries to hand them over to authorities.”

Reports from other “liberated” Libyan cities are similar. In Benghazi last week, citizens attacked and destroyed a building housing 36 citizens from Chad, Niger and Sudan. The Africans were accused of being “mercenaries” and subsequently arrested, local residents told Western journalists.

The brave anti-Ghaddafi Libyans reporting about their fight against the regime through social media in the internet or by telephone are sending out the same message. The “Libyan Youth Movement”, standing in constant phone contact with Libyans in the war zone and sending updates and videos via social media, generally refers to those still resisting the popular revolution as “mercenaries”.

These sources frequently talk about interim authorities in “liberated cities” arming local youths to go after “mercenaries”. There are frequent messages in a victorious tone about “mercenaries running away from protesters” and youths “catching mercenaries.”

Equally disturbing, the most appalling scenes – including the butchering of Libyan children and women – are always attributed “mercenaries”, seemingly in the belief that a Libyan would never do such barbaric acts. No documentation of the perpetrator is ever presented.

As the public hatred against the “black African mercenaries” is increasing, not all Africans arbitrarily captured are treated as humanely as by Al-Bayda interim authorities. There is a growing number of reports about sub-Saharan Africans being killed by lynching mobs in “liberated Libya”.

For example, last week a Turkish construction worker told the ‘BBC’: “We had 70-80 people from Chad working for our company. They were cut dead with pruning shears and axes, attackers saying: ‘You are providing troops for Ghaddafi.’ The Sudanese were also massacred. We saw it for ourselves.”

A Sierra Leonean worker in Tripoli reported to his friend: “All black Africans are becoming targets. I write to inform you how deteriorating the condition in Tripoli is getting by the hour, especially for us black Africans who have been threatened by violence accused of siding with the regime.”

“Somalis in Tripoli say they are being hunted on suspicion of being mercenaries,” spokesperson Melissa Fleming of the UN’s refugee agency UNHCR recently reported, adding the agency was “increasingly concerned.”

‘Time’ journalist Abigail Hauslohner, currently in Benghazi, talked to volunteers Hayan Salaama and Idris Shebany saying they were “afraid people will attack the Africans.” Workers were attacked while making their escape, they added. A Ghanaian worker added: “The Libyans, when they see the blacks, they will kill them.”

Several thousands of Africans are fleeing Libya towards Niger. Those already arriving Agadéz told the International Organisation for Migration (IOM) about “the thousands of sub-Saharan Africans holed up inside their homes without any assistance at various places including Moursouk, Sabah, Misrata, Tripoli and Benghazi, desperately searching for vehicles to escape the targeted violence they feel is coming their way.”

The number of sub-Saharan Africans residing in Libya is unclear, but civil society sources speak of “several hundreds of thousands” legally registered Africans. In addition, a very large number of illegal immigrants and asylum seekers are in the country.

It is widely believed that there indeed are mercenary troops in Libya, event though the proof presented is poor. Several sources speak of a secrete recruitment of mercenaries among several rebel groups the Ghaddafi regime has supported through its history; especially from the ongoing Darfur conflict.

No reliable sources are found documenting this, however. The Libyan League of Human Rights today claimed that there were around 6,000 mercenaries in Libya, “of which 3,000 are in Tripoli.” But it presents no documentation.

Several videos and photos, allegedly documenting groups of mercenaries in Libya, circulate in the internet. Most tell little about the origin of these pro-Ghaddafi forces, which also could be Libyan. A few however show dark-skinned individuals – plain-clothed or uniformed – seemingly of African origin.

The few Africans caught with weapons and speaking to Western journalists claimed not to be mercenaries, but were looking for work in Libya. They claimed to have been picked up by officials and promised work in Tripoli. In the capital, they were sent to army barracks; given arms and a large sum of money and ordered to shoot at protesters.

But most sub-Saharan Africans arbitrarily detained in “liberated Libya” deny ever to have taken part in the fighting, saying they are workers or looking for work.

Stronger and stronger doubts about the existence of African mercenaries are emerging. Today, scared Ghanaians finally left to flee to Egypt said they were forced “to pose as mercenaries” by Libyans, who later posted their pictures on social media such as YouTube and Facebook.