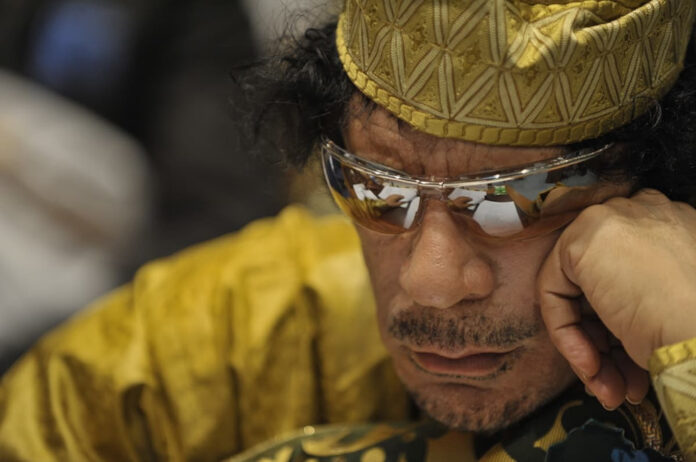 As an international intervention to stop Colonel Muammar Gaddafi from committing further atrocities against Libyans continue, the north African country’s leader remains impassive and has sworn to win this battle at all costs. The self professed Libyan “Guide” is relying on his armed forces and a number of African mercenaries. But the so-called mercenaries, mostly Tuaregs, have another problem at hand.

For some time now, a strange procession of 4X4 vehicles has been noted in the Sahara desert. According to local sources, some 800 young Tuaregs from Niger and Mali have journeyed to Libya to join Colonel Gaddafi’s military rank and file.

“They leave in small armed groups (…) with 400 euros each, and nobody checks their entry,” Ibrahim Diallo, a journalist who lives in the region of Agadez, Niger, told Afrik.Tv. These young people, mostly veterans of the 2006 and 2008 rebellions, attracted by the promise of money, are recruited by Niger Tuaregs who have settled in Libya, as well as Aghaly Ag Alambo, former rebel leader of the Niger Movement for Justice (MNJ).

“There is a lot of unemployment in the north. The population is isolated, tourism is in shambles. To survive, young people have no other choice but to work for Al Qaeda in the Islamic Maghreb (AQIM) or serve as mercenaries,” observes Abdoulahi Attayoub, head of Temoust, a Tuareg website. Last November, Tuaregs had been accused of complicity with members of Al Qaeda. They were suspected of having handed Western hostages over to the islamist organization for large sums of money.

The same trend has been noted in Mali where, according to local sources, several convoys have left the towns of Gao and Kidal Sebbha for Libya. RFI (Radio France International) correspondent in Mali, Serge Daniel, says he saw “young unemployed Malian Tuaregs,” offer their services in a five star hotel in Bamako “for US$ 1000 a week.”

These young Tuaregs have added to the numbers of mercenaries, reportedly from from Chad, Somalia, Zimbabwe, Ethiopia, Burkina Faso and Liberia, who have been joining the regular Libyan army.

“Flights have been ensuring the transfer of mercenaries in collusion with some West African leaders. Muammar Gaddafi has much influence on political leaders due to the help he has given them. I cannot say that every president is aware of these recruitments but when one has an inkling on the number of political parties funded by Gaddafi some questions may be asked,” says Moussa Al Koni, former Consul General of Mali in Libya.

But according to Moussa Al Koni, who recently resigned from his diplomatic position, the recruitment of Tuaregs in Mali and Niger is fictitious. “They have enough idle Tuareg youths in Libya, they do not need to go look elsewhere,” he says with conviction.

In the 90’s, Tuaregs fleeing repression in Mali sought refuge in Libya. During the rebellion, Muammar Gaddafi served as mediator between the authorities in Mali and Niger on the one hand and the Tuareg rebels on the other.

“He doled out large sums of money to the leaders of rebel movements. He helped them in order to secure his hegemonic position in the Sahara region,” says Camille Lefebvre, a specialist historian on Niger.

The result of Gaddafi’s support has enabled many Tuaregs to acquire Libyan nationality thereby allowing them to join the northern African country’s army. And according to Moussa Al Koni, the Libyan-Tuareg soldiers who number between 3000 and 4000 have been transferred from the traditaional base in the south to the north of the country where the protests are taking place.

“Gaddafi formed the ’Maraoui’ division composed of Tuareg fighters. These (Tuareg foot soldiers) have been used in Chad and Lebanon where many of them lost their lives.”

Nonetheless, some Tuaregs are grateful to Muammar Gaddafi. “For them, Libya has been a rear base for Tuaregs. Thanks to this country they have acquired military training. They think that the Libyan colonel will always be there for them in difficult times,” posits Hama Ag Sid Ahmed, spokesman of a Tuareg Movement in Mali led by Ibrahim Ag Bahanga who is bent on ensuring that none of his troops join Gaddafi’s forces in Libya.

Since early 2010, the movement has been seeking to re-organize itself both politically and militarily to confront the “harmful silence of the central government in Bamako (…) The insurgency in Libya has not distracted the Tuareg from their goals. It has rather allowed them to come together to deliberate issues and to draw up new perspectives,” Hama Ag Sid Ahmed adds.

Despite these efforts, many observers have expressed fears over a possible degeneration of the situation to the northern region of Mali and Niger. “There is fear of confusion and stigmatization of the Tuareg community. If Muammar Gaddafi falls, there’ll be nobody to serve as a buffer between the authorities and us. If states do not talk with the Tuaregs (now, editor’s note) and or take into account their demands it will be legitimate to take up arms,” says Abdoulahi Attayoub, President of Temoust.