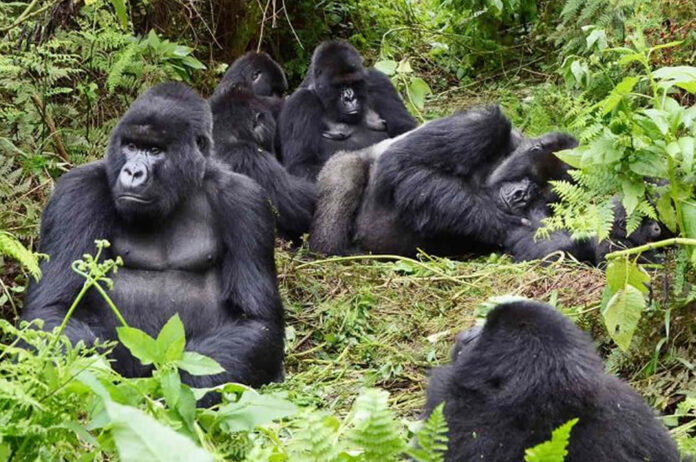 Rwanda expect Kampala to fulfill its obligations on revenue sharing after a group of gorillas in Volcanoes national park (North) crossed to neighboring Uganda on August 28th, 2019.

Reacting to media reports of gorillas from the Hirwa family (from the Volcanoes National Park Rwanda) crossing over to  Mgahinga Gorilla National Park in South western Uganda, Rwanda Development Board – RDB’s Chief Tourism Officer, Belise Kariza said that the occurrence wasn’t new as gorillas have always moved freely in the Virunga massif without any physical and political barriers.

Ms. Belise noted that, while animal transboundary migration was uncontrollable, the case of Virunga massif was eased by the Greater Virunga Transboundary Collaboration (GVTC) initiative that was created in 2015.

She said countries several times have agreed that tourists can track the migrated gorilla groups and in return a revenue sharing remittance. Belise cited a case of Kwitonda group that moved from the Democratic Republic of Congo (DRC) to Rwanda.

“Through the Greater Virunga Transboundary Collaboration initiative, when gorillas cross to another country and are visited by tourists, revenues earned are shared between the two countries,” said Belise.

“We expect Uganda to fulfill its obligations and share revenues from “Hirwa” group that crossed recently from Rwanda,” she added.

The GVTC initiative calls for good faith among the parties in managing gorillas from partner states. It stipulates that member countries will protect each other’s gorilla families when they move across the international borders, permitting the country of origin to monitor the gorillas at least once a month.

It also notes that the gorilla group that moved can continue being tracked with the host country taking 50% of revenue generated from gorilla tourism from the family, during the period the gorilla family is resident in another country.

This means that the money collected from the sale of gorilla permits [Hirwa family] currently living in Uganda will be shared 50-50 between Rwanda Development Board (RDB) and Uganda Wildlife Authority (UWA).

According to Dr. Andrew Seguya, the Executive Secretary at Greater Virunga Transboundary Collaboration, he says that the 2015 GVTC preamble recognises earlier initiatives like the 2006 treaty meaning tourists will be required to pay 50% [$750] of the Rwanda gorilla permit cost [$1500] to RDB, then RDB informs UWA in advance of the tourists desire to pay the balance [$750], then they will be taken to track the Hirwa gorilla family.

“Basically Transboundary movement of gorillas is a very positive development as it increases the habitat of the gorillas, demonstrates the positive gains in conservation of the three states of DRC, Rwanda and Congo in that the VIRUNGA Massif is safe ecologically for the gorillas to freely roam,” said Dr Seguya.

“It gives opportunity for both Rwanda and Uganda trackers to work together in monitoring the gorillas and also taking visitors to them,” he added.

Africa Tembelea has learnt that, the factors determining the movement of mountain gorillas within the Virunga massif include among others physical interactions between different groups, inter groups competition for food and reproduction.

The Hirwa Group with 17 individuals, is among other mountain gorilla families that range within this area and specifically its home range is right near the Gahinga Volcano which is shared with Rwanda and Uganda.